Sorry to my friends who are wondering if I disappeared. Each morning I wake up with prayer and gratitude and things to do and goals and ask the Lord to help me accomplish as much as possible, but within hours, my body has betrayed me and I can't push myself no matter how hard I try and pray. People with good adrenal glands can push themselves through their pain and fatigue, but lupus destroyed my adrenal gland, so "my get up and go, got up and went". 3 days ago both my mother and I were taken to the hospital in separate ambulances at the same time. We both have lupus, and when the barometric pressure gets too high, we both get really ill, but the lupus affects different parts of our body. That was the second time I had been to the E.R. that day, and the first time, the meanest, most disliked, and actually the most dangerous Dr. was on call in the E.R., and again I was treated so badly, and in too much pain to defend myself, and didn't have anyone to go with me. They tried 7 times to get an IV in me, and in all the many years of me getting IV treatements, I have NEVER had them try these very painful spots. It almost seemed as if the Dr. told them to make it as uncomfortable as possible so I wouldn't be in a hurry to go back there. They tried places like my inner arm almost in my armpit, and my feet, and other places on my arms and legs where I have NEVER had someone look for a vein. I already stay away from the E.R. and hospital until I am screaming into my pillow and can't handle the torture anymore. I have even stayed home when I thought I was truly dying from heart pain, because I couldn't defend myself or advocate for myself if I went to the E.R. myself. Well, I am SO ready to get up and out and be among the living...and it seems the harder I try, the farther away that goal gets...but I will keep trying, knowing that the Lord has a reason for all things. Back to asking the Lord to help me hour by hour. I pray for all my computer friends. Friends are what makes life worth living...and I hope I can help some of you somehow in this life. We are in the last days, and we are all struggling.

~ALWAYS BE KINDER THAN NECESSARY, FOR EVERYONE YOU MEET IS GOING THROUGH SOME KIND OF STRUGGLE!~

Posted by Bluebirdy at 22:33 6 comments Links to this post

To Serve the Lord...MY ONLY DESIRE!

There is a BEAUTIFUL song that I was not able to embed here. I am smart enough yet to fix the errors, so please see/hear the song here:
http://www.youtube.com/watch?v=vaia32TsPq0&eurl=http://n-u-t-m-e-g.blogspot.com/

And here are the Lyrics.


Posted by Bluebirdy at 23:10 13 comments Links to this post

I have been following the progress and politics of stem cell studies. There are hundreds of incurable diseases that could be cured with stem cells. The big hold-up of stem cells being used, is that uneducated leaders believe that the only place you can get stem cells is from aborted fetuses (feti?) and by embryos that have been frozen for later implantation into infertile mothers. This is not true. They have found stem cells in bone marrow, umbilical cords of mothers who deliver babies, and now even in menstrual blood! There is a story on a friend's blog about how we can save our menstrual blood so that it might save the life of someone in our family when stem cell use gets approved. Already there is a program for saving mothers' umbilical cords after birth. My daughter has saved hers, thinking someday it might help to cure my lupus. This website has a picture of the kit offered to collect and save the blood, and links to the organization that discovered this new advance in science, and offers the service. Please go to
http://mistipurple.blogspot.com/2008/07/ladies-can-save-lives.html . Thanks MistiPurple for writing the article! You are doing great work to aid in healing many diseases in the near future!

Posted by Bluebirdy at 19:41 2 comments Links to this post

Posted by Bluebirdy at 20:14 6 comments Links to this post

One of the most comforting things I've ever read! 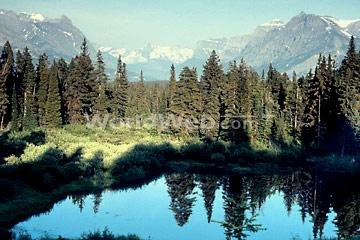 Jasper National Park, Alberta
(about 5 hours from me)
HE LEADETH ME

In pastures green? Not always; sometimes He
Who knoweth best, in kindness leadeth me
In many ways where shadows be,
Out of the sunshine into the darkest night,
I oft' would faint with sorrow and affright,
Only for this - I know He holds my hand;
So whether in the green or desert land
I trust, although I may not understand.

And by still waters? No, not always so;
Oft' times the heavy tempests round me blow,
And o'er my soul the waters and the billows go
But when the storms beat loudest and I cry,
Aloud for help, the Master standeth by
And whispers to my soul, "Lo it is I."
Above the tempest wild I hear Him say,
"Beyond the darkness lies a perfect day.
In every path of thine I lead the way."

So whether on the hilltops high and fair
I dwell, or in the sunless valley where
The shadows lie, - what matters?
He is there!
So where He leads me, I can safely go.
And in the blest hereafter I shall know
Why in His wisdom, He hath led me so."

Posted by Bluebirdy at 12:05 5 comments Links to this post

Scientific studies that PROVE what so many of us THOUGHT was true...that the barometric pressure DOES make us sicker! It raises the inflammation "cytokines" in our blood!

The weather is warm and the skies are mostly sunny, so why are you feeling so lousy? It may be the storms or constant changes in summer weather patterns that are causing your increased symptoms.
Daniel Wallace, M.D., who treats FM patients in the Los Angeles area, noted from his clinical experience that changes in the barometric pressure are more important than whether it is hot, cold, wet, or dry. A study done in Cordoba, Argentina followed patients with various rheumatic diseases that may co-exist with FM (rheumatoid arthritis, RA, and osteoarthritis, OA) as well as a healthy control group. All patients were asked to record their pain on a daily basis over a 12-month period. Researchers followed the temperature, humidity, and atmospheric pressure during this time. Patients with FM reported more pain when experiencing cold temperatures and high atmospheric/barometric pressure. High barometric pressure occurs when the skies are clear and low pressure occurs when storms move in. It is hypothesized that increases in barometric pressure could lead to increased production of pro-inflammatory cytokines, which correlate with the pain intensity experienced by FM patients.
Another study done in Norway, noted that patients who have lived with FM less than 10 years were more weather sensitive than patients who had the illness more than 20 years.
But while patients seem to report more flares in January, watch out for the summer storms because they cause dramatic fluctuations in barometric pressure. The summer and fall seasons are usually full of weather changes that may zap your energy and intensify your pain. If you live in the hot Southwestern United States, try to stay out of cold, air conditioning drafts. Dress in lightweight but layered clothing so that you do not swelter in the outdoor heat or shiver in the grocery store and other chilly environments. If you live near a coastline, get extra rest and take care of yourself during the summer storms.
Your ability to tolerate the heat might also depend on your gender. In general, women prefer warmer climates more so than men because of differences in the way their sympathetic nervous system operates. When subjected to hot environments, this system constricts the peripheral blood flow more in women than in men. The result is a cooler skin temperature for women. Although the sympathetic nervous system is a major player in the body’s stress responses, this difference between men and women cannot be explained by psychological stress.
Charles Vierck, Ph.D., and colleagues at the University of Florida, tested the temperature preferences of male and female rats to bypass any psychological factors that may influence temperature sensitivities.* In fact, more than one strain or type of rat was tested, but the results were still the same. Female rats were much more cold-sensitive and preferred warmer temperatures, while male rats showed the opposite preference. These results mimic what has been shown in people and could imply that men might prefer cool wraps to soothe their achy muscles."
Taken from literature by: Fibromyalgia Network … Helping Patients Since 1988
PO Box 31750 Tucson, AZ 85751-1750 (800) 853-2929
www.fmnetnews.com
There are also individual differences between people, such as many of us who can't handle damp weather, many who can't handle extremes of hot or cold. I guess that really does make me a "fair weather friend" because I'm a useless friend if it's not fair weather. lol.
Blessings,

Just hanging in there!

Posted by Bluebirdy at 11:25 0 comments Links to this post

Posted by Bluebirdy at 20:55 3 comments Links to this post


Top 10 things NOT to say to a chronically ill person

Posted by Bluebirdy at 20:22 5 comments Links to this post

A DAY TO CELEBRATE LIFE!!!

One year ago in July I was told I had 1 year to live. This is August 1st, so my 1 year deadline (no pun intended, lol) is over! I came close a few times to not making it, but now I am living on...not borrowed time...but on God given time! WOOHOO! Since it's not my time to go yet, and I obviously have something left to finish here on earth, I am praying, researching all I can to get feeling better and praying for the strength to do the things that I find that I need to do to get stronger and healthier.
Thanks to all who have congratulated me!
Blessings,
Bluebirdy

Posted by Bluebirdy at 12:38 2 comments Links to this post