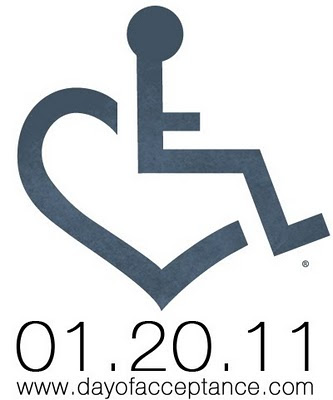 DAY OF ACCEPTANCE FOR HANDICAPPED AND CHRONICALLY ILL
JANUARY 20, 2011

Posted by Bluebirdy at 13:53 3 comments Links to this post

Fibromyalgia CAN Be Proven!

In reply to my friend E-patient Dave (Dave DeBronkart)'s suggestion to please share with others why it is a myth that Fibromyalgia (FM) can NOT be proven or diagnosed:


Dear Dave
I think I got the message late on Twitter that you wanted me to share some ideas about proof that Fibromyalgia CAN be diagnosed. So here's my humble offering.

The problem is that when the term "Fibromyalgia" was coined in 1988 or so, the medical world called it "A wastebasket term, a miscellaneous category to place patients in when they continue to have pain without any positive blood tests." One interesting fact is that when these people go see different specialists who take various other tests, they DO find a real diagnosis such as hypothyroid or metabolic disorders, cellular dysfunction, so they no longer have the diagnosis of Fibromyalgia even though they have the symptoms. One of the problems of this disease is not being able to think clearly, kind of like having Attention Deficit Disorder (ADD), so you can change and organize this letter any way you'd like.

1) It has been found that 95% of people with Fibromyalgia and Chronic Fatigue Syndrome have XMRV virus. The virus has also been found in some with Multiple Sclerosis and Lyme disease, which have overlapping symptoms with FM. Unfortunately there is only one place in the USA that is able to test for this virus. It's the Whittemore Institute in Reno, Nevada, USA.
http://www.wpinstitute.org/xmrv/

It's considered severe enough that the Red Cross have suggested that people with the XMRV virus should not donate blood. They have also found the virus in 3% of the blood supply. http://tinyurl.com/5wzjvnw

2) There is a virus researcher who often claims that her FM (fibro) patients are much more ill than her AIDS patients. Her name is Dr. Nancy Klimas.
http://tinyurl.com/6xm2zgw

3) I can't remember where I read it, but one rheumatologist found that the only patients he had who felt pain when the blood pressure cuff was applied, were patients with FM. This news has spread and has become a starting point for suspecting FM in patients without other diagnosis.

4) The World Health Organization (WHO) seems to be ahead of the doctors in their knowledge of FM. I am hoping the doctors in medical school now will learn the new facts and appropriate respect for the disease instead of the abuse and neglect we get from the older doctors who refuse to learn anything new about the problem. Here is the WHO's statement about FM. The WHO has dozens of pages of information about the disease, various studies, treatments and symptoms. http://www.who.int/

5) When consulting with the Disability Board of the USA, you will find they say that it is a growing and disabling disease, both in the handbooks of SSI and SSDI.

6) There is a medical 400 page manual written by Dr. Devin Starlanyl M.D. that lists every symptom possible in FM, explains why it happens, complete with diagrams. The symptoms are consistent from patient to patient worldwide, so there is no doubt that this can not be a disease of the imagination, as most doctors treat us like it is. See
"Fibromyalgia and Chronic Myofascial Pain Syndrome, A survival Manual" by Devin Starlanyl M.D. and Mary Ellen Copeland, M.S., M.A. It can be boughten as a used book, as it is a bit more expensive than fiction books because of the reference and medical matter, but it is intensely helpful to every fibro patient, it discusses how to live with the illness in almost every area of life.
http://tinyurl.com/5u9ppyy


You can also find her website about FM for more info here, where you can read more than I can research for you:
http://homepages.sover.net/~devstar/

The WHO agrees that integrative medicine, alternative health practices, and prescriptions work in combination to increase the quality of life in an FM patient. What we are waiting for now is an anti-viral for the XMRV virus. They made one for HIV, HPV, type A flu and cold virus, and soon it will be our turn as well.

Thanks for asking me, I also have lupus which makes my health and energy limits much more complicated. I wish I could have done more research for you.

Posted by Bluebirdy at 22:27 6 comments Links to this post

Are we living in the tribulation period?

Just this week we have seen floods, fires, massive snow, cold in India and other countries that have never seen frost or ice before. One scripture says "Men's hearts will fail them to see the news." Since watching the summary of all that happened in 2010, and now watching all that has happened in the past 12 days of this year, it is stranger than fiction! All of the other events that the revelations mention are also going on such as terrorism, hatred, unnatural feelings between family members, every crime, sin and evil thought imaginable, and even some that are not imaginable because most people just don't think the same as those being influenced by Satan and his helpers.
PICTURE HERE
Australia
One quarter of Australia, and getting bigger, is a flood that is up to the roofs of homes. In 20 minutes yesterday, they had 36 inches (150 centimeters). One man said it was not like raindrops, it was like a swimming pool being emptied from the sky. In the South of Australia, deadly heat and multiple fires are the  problem. No other countries seem to aiding Australia. I don't understand that. Many individuals are helping, and individuals raised about 33 million dollars. I only will donate through the official site that the money will get to the right place. There are many scammers making fake charities and collecting money, saying they are going to give it to Australian flood relief. Here is the site if you want to donate. you can give anything, even $5. Remember, "If you do it unto the least of these, my brethren, you do it unto me."-Christ . http://www.qld.gov.au/floods/donate.html
Also if you are ever involved in a natural disaster, you want others to help out. "Pass it forward."
I started writing this blog a few days ago. Now when I check again, Jakarta, Papua New Guinea, and the Queen of England have pledged money to help in Australia.
PICTURE HERE
Birds, fish, small animals dying by millions worldwide.
Something WEIRD happening! MILLIONS of birds falling from sky worldwide, fish, crabs and some small animals all dying, no one can figure out why. Seems like Biblical type curse or horror movie. Logically, whatever is causing it MUST have some affect on people too! Russia reports 2 million birds. 100,000 dead fish in Arkansas, France, Western Australia, Philadelphia, California, Sweden, Italy, New Jersey, England and more. The U.S. Gov't claimed responsibility for 1 batch of dead birds in Arkansas, but they must be lying because this is worldwide! They claimed that they poisoned a flock of redwinged blackbirds to lower the population, and they ate the poison then died a short time later while flying. If that's true, then all the dogs, cats, children who touch these dead birds could also be poisoned by the poison that the birds ingested. That could cause a lot more deaths, including children. As for the rest of the world, scientists are all trying to figure out the cause. It has affected many breeds of birds, fish, shellfish, even animals.
Ok, I just now read an article saying that no poison was found in the birds that were taken to a lab to determine cause of death in Arkansas, where they said they poisoned the birds. US government is notorious for lying or keeping silent anything that might make the public panic. At least there will not be danger to dogs and cats or children who touch the dead birds. There are so many dead birds on rooftops they are not sure what they will do about those.
These are the "great and dreadful times" that the scriptures speak of.
Blessings, Sheila
(various videos and news stories below)
New Jersey:
http://www.youtube.com/watch?v=rVDEH9wdgZc&NR=1

Posted by Bluebirdy at 18:38 2 comments Links to this post