Do You Enjoy Prophecy & Revelation? 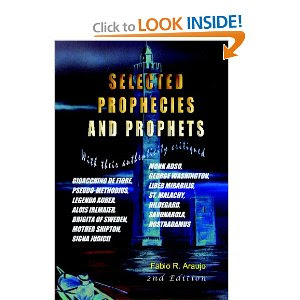 (This is a photo from http://www.amazon.com/ .
There, you CAN click on it to see more inside, but it won't open here, sorry.)
I have always enjoyed studying signs of the last days and various revelations from the Biblical prophets. Since I do proofreading for a living, a few years ago I was offered a job of editing and proofreading a book about prophecies by a man whose first language is not English. He has has a supernatural experience when he was a young man, and it fascinated him so much, he has spent his whole adult life (20+ years) studying prophecies from all eras and languages and countries. The Biblical prophecies have been written about endlessly, but Fabio R. Araujo, the author, wanted to find out if other cultures and eras also had revelations and prophecies, and if they are similar to the biblical prophets' words or not.
More has been added and changed since that first book I helped to proofread, and now you can find his book at http://www.amazon.com/ . The title is "Selected Prophecies And Prophets" by Fabio Araujo. Within this fascinating book, you will be shocked to find that our Heavenly Father has given many of the same prophecies not only to the Hebrew prophets, but to people from all ages and in every country. I am sure most of you are familiar with Nostradamus' prophecies, but did you know that the scientist, Isaac Newton, also had prophecies, but wrote them down and kept them secret until his death so he would not be beheaded for heresy to the Church of England?
In the book you will find prophecies translated from Latin, old French, old Italian, German, and many more languages. It includes prophecies from lesser known "seers" such as Giocchino di Fiore, Monk Adso, Savonarola, and more famous seers such as Nostradamus, Leonardo da Vinci and Napoleon, and more. It includes prophecies found in ancient works called the Legend Aurea, Liber Mirabilis, Signa Judicii, and Alois Irlmaier.
You will be surprised as you feel the familiarity of the prophecies revealing the continuous expectation of increasing natural catastrophes, including the great flood and 3 days of darkness (which happened when the Lord was crucified), and a final global war, along with the descriptive statements as they try to explain the machines and uniforms and equipment we have now, from the minds of people who have never seen such things.
Medieval prophecies about the Anti-Christ, the King Messiah, and the Angelical Shepherd add value to the book.
The author visited libraries in many European countries and read hundreds of books and manuscripts, getting them translated as he could afford to do so, and learning much about the languages he was reading for himself, such as English, Spanish, Italian, French, Portuguese, and German.
He also has a website called "Prophezeiung" which is the German word for Prophesying. http://www.prophezeiung.net/
His book has been published in English and German, with publishers in other countries now considering the publication.

Fabio Araujo has a number of books, another one which is about prophecy

is called "Mother Shipton: Secrets, Lies and Prophecies". His full name is the name used as author for this book, Fabio R. de Araujo. You can also search for that at www.amazon.com .
Who was Mother Shipton? Some people consider her the most famous prophet in the last 1000 years, after Nostradamus. She is probably the most famous prophetess in the world's history. While some think she really existed, and was a soothsayer, or perhaps an astrologer or predicted facts (most of them regarding the 1600s or about our own future), others believe she is no more than a legend who was slowly built over the centuries.
To me, this is confirmation that there is a God, and that He cares enough about His children world wide to warn them that if they do not change their ways and turn from the natural man, the worst will happen and we will utterly destroy ourselves. When there were no Christians on the earth yet, there were prophecies. Where people had never heard of the Hebrew Prophets or of Jesus, there were prophecies. Where people did not believe in the Christian religion, there were prophecies, most of them very similar.
Be sure to search his name online and at www.amazon.com so that you can see if his other books have been published yet. He has been doing fascinating research on global warming, and the changes in global temperature and land changes from many eras past. This is not a new phenomenon. It happens in cycles. He has published a book on the subject called "Global Warming, Global Flood". You can find this on the website I mentioned above.
You will also find his book about Nostradamus' life and prophecies, and a book written by Isaac Newton, which he has republished.
This man is a humble, spiritual, quiet man, and writes in an easy, understandable way for the every day person. I hope you'll check out his works
Blessings, 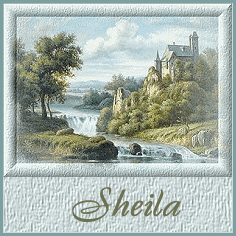 I will only read and believe Biblical prophecies otherwise I will be confused and will doubt my own beliefs. Let others study arcane knowledge and unknown revelations. I have been there before. I will just stick to my own beliefs based on Biblical revelations and pronouncements. God will judge me on how I treat His divine revelations and Biblical pronouncements and not on how I did not study other peoples beliefs so that all knowledge and beliefs can be synthesized and harmonized into one single universal principle. This may be a trap from the enemy. Thanks for the post. God bless you always.