THIS IS ONE OF MY FAVORITE STORIES THAT EXPLAINS WHY WE SUFFER. 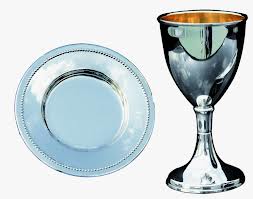 This verse puzzled some women in a Bible study and they wondered what this statement meant about the character and nature of God. One of the women offered to find out the process of refining silver and get back to the group at their next Bible Study. That week, the woman called a silversmith and made an appointment to watch him at work. She didn't mention anything about the reason for her interest beyond her curiosity about the process of refining silver. As she watched the silversmith, he held a piece of silver over the fire and let it heat up. He explained that in refining silver, one needed to hold the silver in the middle of the fire where the flames were hottest as to burn away all the impurities. The woman thought about God holding us in such a hot spot;then she thought again about the verse that says: "He sits as a refiner and purifier of silver." She asked the silversmith if it was true that he had to sit there in front of the fire the whole time the silver was being refined. The man answered that yes, he not only had to sit there holding the silver, but he had to keep his eyes on the silver the entire time it was in the fire. If the silver was left a moment too long in the flames, it would be destroyed. The woman was silent for a moment. Then she asked the silversmith, "How do you know when the silver is fully refined?" He smiled at her and answered, "Oh, that's easy -- when I see my image in it." If today you are feeling the heat of the fire, remember that God has his eye on you and will keep watching you until He sees His image in you. Pass this on right now. This very moment, someone needs to know that God is watching over them. And, whatever they're going through, they'll be a better person in the end.
-author unknown

Posted by Bluebirdy at 20:21 3 comments Links to this post

I was deleting old drafts, and the "posts" page popped up, and I deleted a couple of posts!!! SO FRUSTRATING! It took all the strength I had to make that post yesterday or the day before. It was the one about what we can learn from suffering and trials. Oh man! FIVE of them are gone. Oh well... Everything happens for a reason.
*sigh*.

Posted by Bluebirdy at 19:47 0 comments Links to this post 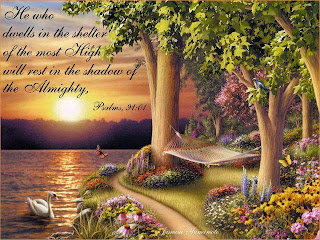 He who dwells in the shelter of the most high will
rest in the shadow of the Almighty. –Psalm 91:04
Hello friends,


I’m sorry I’ve only posted 2 posts in 1 year. My health got much worse, which affected my concentration, so I am no longer able to think like I used to. I part of each day semi-conscious due to various health problems, and even my vision changes from hour to hour.


However, through it all, I am at peace, more than any other time in my life. I feel the Lord near. I feel His guidance, His whispers, His comforts through the Holy Ghost. I am most blessed!! Depression and anxiety are gone. I get frustrated now and then, but not a true clinical depression.


In January I went through a divorce. I tried for 8 years to get permission for my husband to immigrate to Canada. Why it took 8 years, will never make sense to me. It was only a few years that we realized that this marriage would not work out. I had become too sick to help him in every way a wife helps a husband, and to help him adapt to a whole new culture. We wanted to stop the immigration process earlier, but we weren’t allowed to, unless we claimed that one of us committed marriage fraud, which would mean jail. So we just kept going through the torment of paperwork over and over and over, and the emotional turmoil involved. The Dr. suspected that a lot of my heart problems came from the immigration stress for so many years. When we learned that hubby would not even be allowed a visitor’s visa, and I’m too sick to go to another country, we decided it’s best if we broke it off, to give hubby a chance to fall in love and have a normal marriage with children.


In February I had a head injury that has also caused problems. They called it a mild TBI (Traumatic Brain Injury), with post-concussion syndrome.


In April a Dr. told me I need a heart transplant, so I guess one of the big problems with my brain is not enough blood getting to it. I won’t be getting the heart transplant. I don’t qualify for the transplant list, because I have other organs that are failing; and because lupus would attack the new heart too. Even if my health was better, I’ve been told that in Canada, (or possibly just my province) people who are on disability don’t qualify, because the gov’t doesn’t spend large amounts on us. I was denied a pacemaker/internal defibrillator a number of years ago. I am not a bit scared though, because every time my heart has stopped, if there wasn’t a medical person around to restart it, God would restart it, and He will continue to do so until my purpose is finished for being kept alive.


I’ve missed the blogging community, and I’ve lost a lot of friends because I was not strong enough to keep up with email replies. I’m hoping I can attend to my blog more often, but I might be using a lot of pictures rather than a lot of writing. I’ll do what I can. Thanks to those of you who have kept in touch with me through all of this. I hope to be able to start blog-hopping again.
May the Lord bless you as He has blessed me!

Posted by Bluebirdy at 19:26 2 comments Links to this post