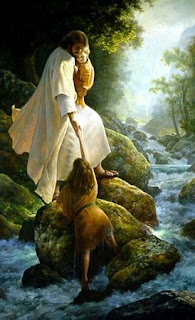 This picture reminds me of Matthew 4:6 which says:

"He shall give his angels charge concerning thee: and in their hands they shall bear thee up, lest at any time thou dash thy foot against a stone. "

The Lord is protecting my husband so much! When I get time I will have to tell you all the close calls he has had and was saved from...but in a way I don't want to, because they are so dramatic, I don't think people should have to ever see or remember such terrible events that go on in war.
I have been thanking the Lord so much this week for my new found feeling of not being completely abused like all patients with lupus and fibromyalgia seem to be, and for this week's protection.

Adventure #1 he was protected in:
Last weekend my husband was walking to a restaurant. On his right was a hotel with a river behind it. On his left was the street. Suddenly the Taliban and army started shooting each other on the street he was on, so he and his friend ran to the river bank, to get behind the hotel, to escape any bullets. Right then, the river bank was bombed and 100 feet or so were on fire. He said he was running toward the bombed area when the bomb hit, so he should have shrapnel damage or should have been blasted off his feet, or should have been burned by the fire, but he wasn't. He had to get away from the flames but couldn't run back toward the street where he would get caught in cross fire, so he and his friend tried to protect themselves from the heat of the huge fire by hugging the side wall of the hotel. Bullets were flying past him, and the heat of the fire was started to bubble the material the wall was made of. I asked why he didn't get on the ground and he said that was all huge boulders used as garden decoration. Being that high off the ground would have made him prone to the bullets.

Adventure #2 protected from:
Then on Tuesday he got a high fever, and remembered being bitten by a mosquito. Malaria is very common there, so he started taking anti-malarial pills until he could get to a Dr. We prayed and prayed that he wouldn't have Malaria. I can't imagine me disabled with my illnesses, and him disabled with recurring bouts of malaria. On Friday he went to get a malaria blood test, and he doesn't have it after all! THANKYOU LORD! He has a sinus infection. People there are getting a lot of lung infections and sinus infections, because when bombs explode a place, everything that was in the place, everything the building was made of, and even people inside just turn into mist that hangs in the air, and people inhale it, and get infections from it.

Adventure #3 and #4 saved from:
Yesterday and today there were earthquakes of 5.7 on the Richter scale, and some houses and shop's roofs fell in, but he is fine.
I can only hope the Lord is protecting him so we can spend whatever time we have left together. I think the end times are closer than most people realize, and none of us knows how much time we have left on this earth, & with my health threats, I am just hoping to get to enjoy some time with him before life is over.
Blessings,

God's hands are bigger than ours, and it seems that your husband is meant to pull through without harm. Such wonderful stories. Many prayers and good wishes going your way...